The Labour contest was the first to be fought in thirteen years following the resignation of Harold Wilson.

The bookmakers priced it as follows: 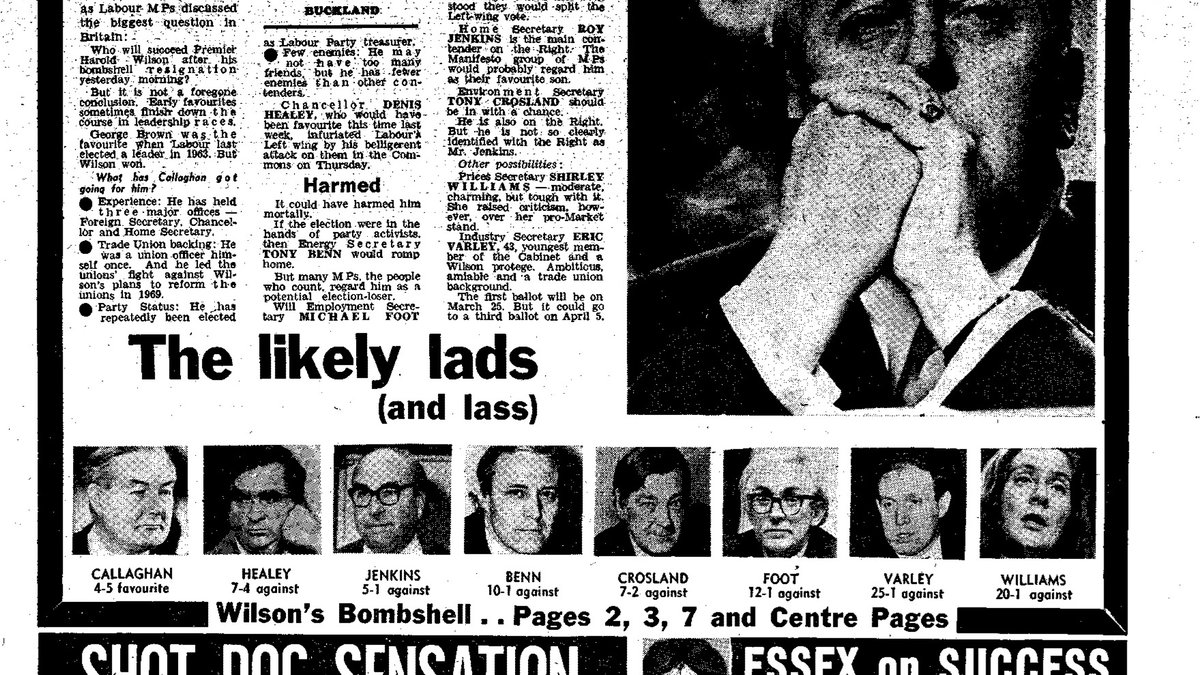 Ladbrokes soon cut Callaghan’s odds to 4/6 and pushed Michael Foot out to 20/1.

Callaghan immediately declared his candidacy via a press release but was said to have been upstaged 30 minutes later by Tony Benn. Benn launched his via a press conference alongside Joe Ashton, Frances Morrell and Francis Cripps.

Callaghan opted for a low-key campaign and refused to issue a manifesto or participate in any interviews. He would later claim there was no point in ‘pretending to wash up in the kitchen’ as Thatcher had done.

Callaghan’s supporters were initially concerned that age would be a factor. Aged 64 he was four years older than Wilson and had been a key member of the Government from 1964 onwards.

Denis Healey was seen as the major challenger. As Chancellor Healey had high personal ratings in the country.

Healey was honest in his stark appraisal of Britain’s economic situation:

Healey was slow to declare his candidacy as he was spending eight hours a day working on a budget ‘leaving little time to whip up support amongst MPs’.

The Sun newspaper invited all candidates to write a column. Only Benn and Crosland accepted the offer. 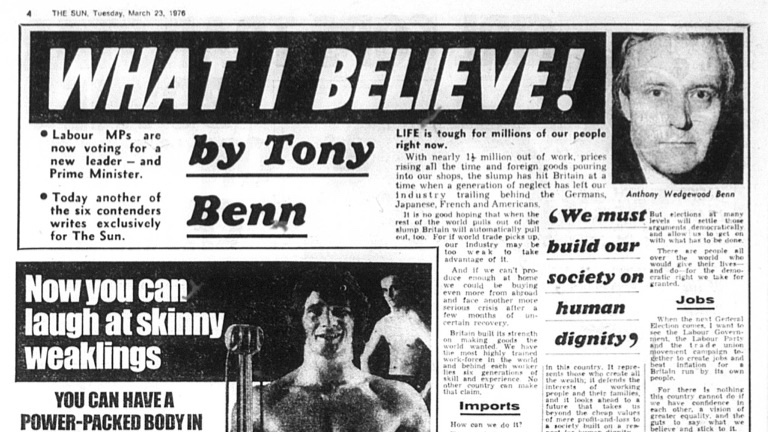 Tony Benn wrote of his plan:

‘First to cut back on foreign imports to get our people back to work making the things we need…second to plan to put more of the nation’s savings into new machinery…third a move towards industrial democracy’.

‘We must stop presenting politics in terms of its personalities alone. It is the policies that matter the most’

‘There is nothing this country cannot do if we have the confidence in each other, a vision of greater equality and the guts to say what we believe and stick to it’.

A Cabinet Minister argued Benn was pitching himself for the next election after a Labour defeat:

‘Tony think people will turn to him as a mixture of a Roman General, Charles de Gaulle and Nye Bevan’

Roy Jenkins claimed he would work with the left of the party:

‘In a coalition like the Labour Party the left has to be recognised. There is no question of driving the left out of the party.

Jenkins secure the support of the Sun newspaper:

‘Mr Jenkins is a thinking Social Democrat. His politics are pretty much our politics’.

‘And we suspect, the politics of a substantial majority of the British people, who wisely tend to shy away from extremism of any kind’

‘He would be widely supported throughout the country by most people who currently vote Labour and by many who do not’.

Jenkins was also popular with the Telegraph:

‘Manifestly the best man for the Premiership’ 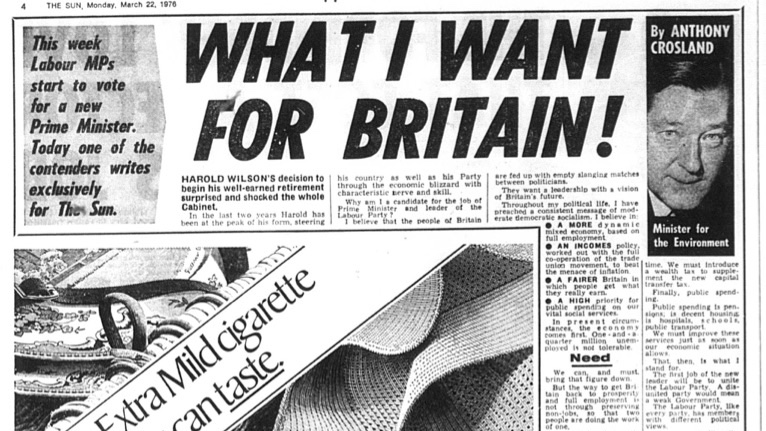 But by 1976, as David Marquand observed, Crosland was a ‘busted flush’ relying on ‘cliché’s about the voters of Grimsby’.

Crosland could not even rely on the vote of his close political ally Roy Hattersley. Crosland asked ‘Even on the first ballot? Then Fuck Off!’.

The BBC Panorama was accused of bias by Crosland and Healey when it featured a three way debate between Healey, Jenkins and Foot.

Callaghan refused to partake just as Margaret Thatcher had in 1975 and claimed that it was the smartest move she made.

Healey had provoked the left of the party just a few days earlier when he clashed with Ian Mikardo over a backbench rebellion on spending cuts.

Eric Heffer shouted ‘Stalinist!’ at Healey and claimed that he had learned nothing since they were both in the Communist Party years ago.

Russell Kerr shouted ‘Bastard! Bastard!’ at Healey and other MPs brandished the V sign at him.

Healey responded ‘Go and fuck yourselves you fuckers!’

Foot and Callaghan also clashed over the way to deal with parliamentary reselection at a Labour NEC meeting. Foot backed Ian Mikardo’s motion for full reselection between elections. Callaghan led the resistance and secured 14-11.

In Swindon, Michael Foot launched a personal manifesto and secured the support of Barbara Castle, Peter Shore and John Silkin.

Foot argued for a return to the spirit of World War Two:

‘I remember the mood which swept this country in the years after 1940. Overnight almost, Britain became a country suffused by what I would describe as a socialist inspiration’

‘The sense of common purpose for the whole community took command; the class barriers started to come down; the unrivalled skill and ingenuity of the British people, so long stifled by the pre-war Tory establishment, was unleashed’

‘It was, over many fields and in many factories, industrial democracy in action. It is what we need again today’.

Callaghan also scored the highest in the most likeable, strong, honest and capable categories.

But in the first ballot Foot emerged as the victor

Roy Jenkins quit the race in order to ‘Stop Foot’ 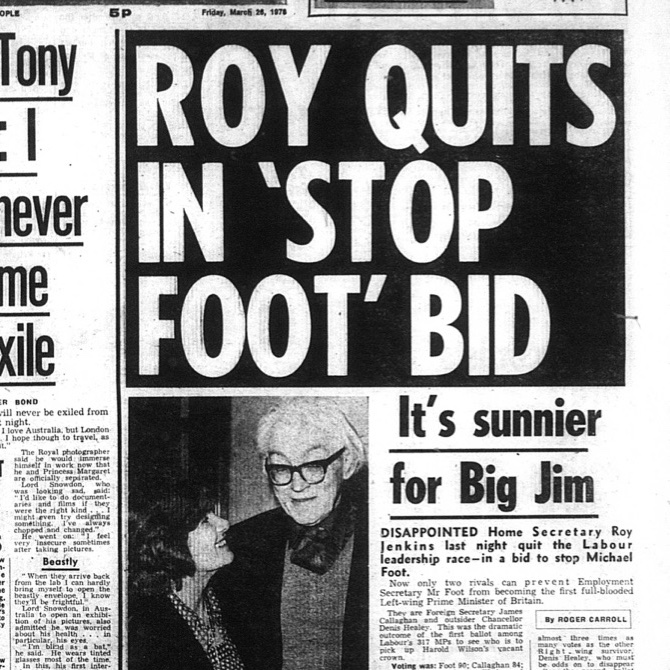 Healey, on the other hand, refused to pull out of the race

‘I have never been a man for bending to pressure. That perhaps is one of my qualifications for the job’.

Benn was pleased to have beaten Healey, writing in his diary, that considering the press onslaught:

‘to have (Jenkins) only get eighteen more votes than me and that Denis Healey should have got seven less. That is amazing…The Wilson era is over, that is absolutely clear’

As the contest moved to the next stage Healey expected to do better but his supporters had to trouble convincing MPs that ‘there is no way Foot can benefit from a Healey vote’ under the system. 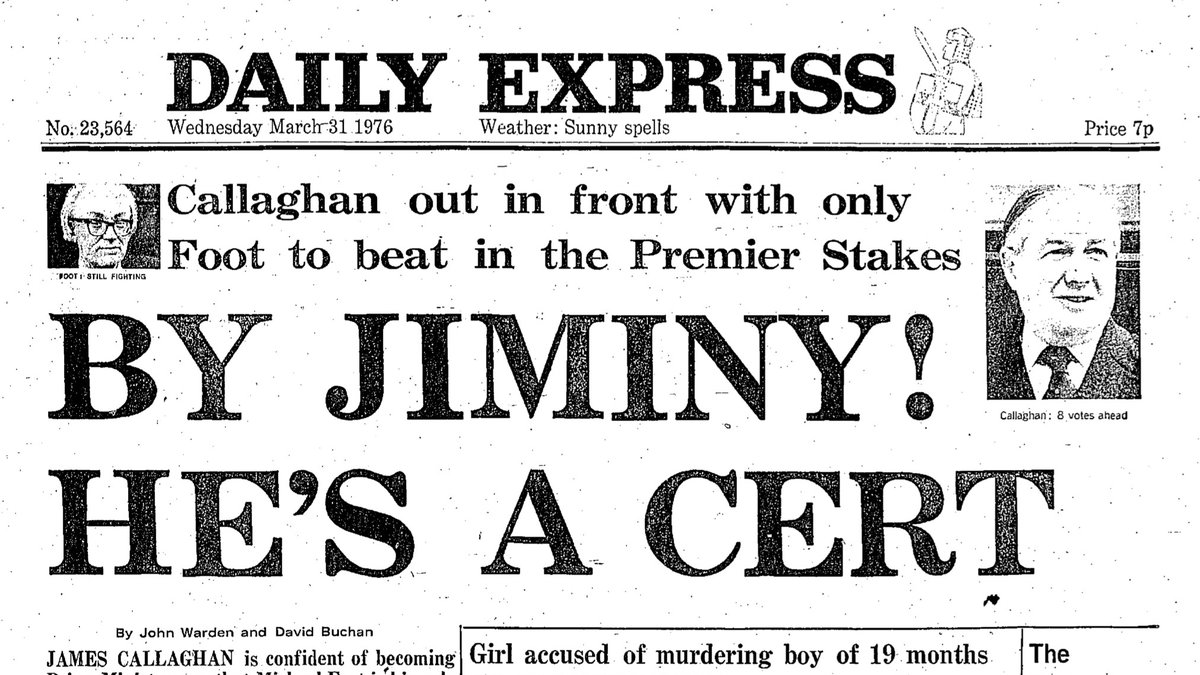 Foot’s camp were said to be confident that they would win the second ballot by ‘seven or eight’ votes with ‘an almost 50/50 chance of winning’. A Sunday Times poll of MPs predicted a 14 vote victory for Foot.

Healey was eliminated meaning a run off between Foot and Callaghan.

‘Harold Wilson was much wiser when he said that the Labour Party must be a crusade or it will be nothing’.

It claimed there was

Foot disagreed with the argument that Labour should pick an ‘election winner’ in Callaghan:

‘Winning elections is like searching for happiness – if you make the search too direct you won’t achieve the objective. But the objective can come as a by-product of reaching other objectives’

‘When the next election comes it is likely to baffle the political prophets and pollsters more than most’.

The media were critical of Foot.

Foot had support through the Daily Mirror

‘The Mirror has no doubt about Mr Foot’s patriotism. No doubts about his devotion to a humane and DECENT socialism’

On the 5thApril James Callaghan defeated Michael Foot by 176 votes to 137. 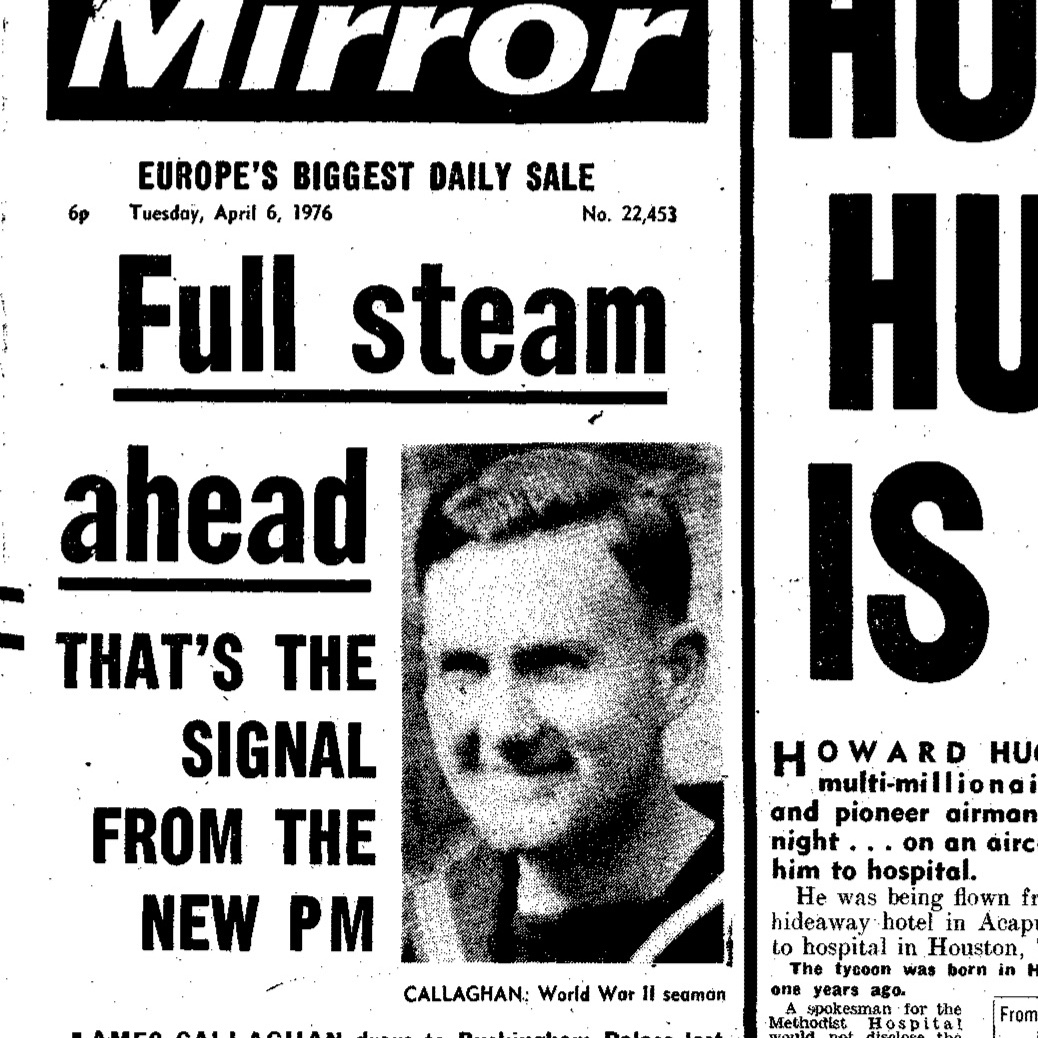 After winning the contest, Callaghan visited Labour Party HQ at Transport House ‘to make the symbolic gesture of linking the party in the country with the members who elected me’

‘He would be an unfeeling man who could sit in No 10 and feel no emotion. For me it was a boyhood dream come true’

Privately, Callaghan was proud to have beaten five of the Labour titans for the job. He told his aides:

‘Prime Minister of Britain…and I never went to University’

‘There are many cleverer people than me in the Labour Party, but they’re there and I’m here’