In 1951 Nye Bevan resigned from the Cabinet over NHS charges. He told Prime Minister  Attlee that Labour’s budget ‘fails to apportion fairly the burdens of expenditure as between different social classes’

A look back at the beginning of the Gaitskellite/Bevanite battle that would divide the party for the next decade.

The 1950 general election result was a hugely disappointing one for Labour. The right of the party aligned the blame at Bevan’s door for his ‘Lower than Vermin’ speech

Bevan took the view that the result was down to the party’s failure to fully commit to a socialist programme.

The appointment of Hugh Gaitskell as Chancellor in October 1950 further angered Bevan.

Bevan wrote to Attlee that ‘I think the appointment of Gaitskell to be a great mistake’ – believing that it should have gone to someone more rooted in the Labour movement.

As the Korean War took hold, the gov were under pressure to increase arms spending.

In March 1951, a proposal was put to Cabinet to bring in charges for glasses and false teeth on prescription.

Gaitskell had long argued for health charges, and on his the first day as Chancellor, spoke to Attlee about it

In contrast, Bevan told dockers in Bermondsey that:

Hugh Dalton noted in his dairy that Harold Wilson was also willing to resign over the matter.

Dalton concluded in his diary:  ‘Wilson is not a great success. He is a weak an conceited minister. He has no public face. He is said to be frantically ambitious and desperately jealous of Gaitskell’.

Gaitskell secured Cabinet support for his proposals at the critical meeting on the 9thApril. Attlee was in hospital with a duodenal ulcer so Morrison chaired the meeting.

The minutes concluded that Bevan ‘would be obliged to resign from the government’ believing as he did that ‘such charges would involve a serious breach of socialist principles’.

Only two ministers – Jim Griffiths and Harold Wilson – supported Bevan’s claim that charges for teeth and spectacles was against the principle of a free health service.

To add fuel to the fire, Gaitskell argued that even if he could find the money to fund this aspect, he would ‘rather spend it on improved family allowances or on more old aged pensions or on a smaller income tax increase’

Gaitskell told previously told Dalton that the party could not be blackmailed on the issue:

‘If we don’t stand up to him, Nye would do to our party what Lloyd George had done to the Liberals’

‘It is really a fight for the soul of the Labour Party. But who shall win it? No one can say as yet…I am afraid that if Bevan wins, we shall be out of power for years and years.’

A day after the crunch Cabinet meeting Gaitskell delivered a budget in a two hour speech to the Commons.

When Gaitskell came to make his big announcement on charges, Nye Bevan stood with Michael Foot and Jennie Lee beside the speaker’s chair.

Benn recorded ‘Nye peered anxiously at the Labour benches. Eyes going back and forth, up and down….

‘The announcement was greeted without a sound. We all took it absolutely quietly. Nye looked crestfallen and disappeared through the glass doors’

However, it would be another thirteen days before Bevan finally resigned from the Cabinet, waiting for the second reading of the National Health Service Bill.

Manny Shinwell made an important intervention supporting the gov:

‘If there are people who say “I am the person who counts, never mind others” then they are better out of the party’

However, the Guardian speculated that 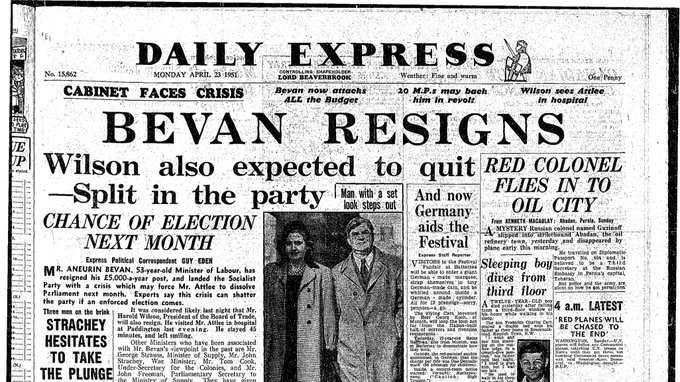 ‘Bevan’s resignation may well bring down the government. It is too soon to say’

Bevan finally resigned on the 22ndApril 1951. In his letter to Attlee he claimed:

‘It is wrong because it is based on a scale of military expenditure in the coming year which is physically unattainable without grave extravagance in spending.

‘It is wrong because it is the beginning of the destruction of the social services in which Labour has taken a special pride and which were giving Britain the moral leadership of the world’.

The Guardian summed up the mood:

‘Many tonight are sick with anxiety and anger at Mr Bevan’s resignation. The morale of the party has been low for many months’

Bevan’s resignation speech in the Commons was seen as a spectacular – and out of character – failure, totally misjudging the mood within his party with a bitter and egotistical attack.

Michael Foot, later wrote in his biography of Bevan that:

‘Not a touch of warmth alleviated the universal coldness. No single cheer greeted his peroration’

In the speech, Bevan took aim at the party’s economic programme:

‘it is no use pretending that the Budget is just, merely because it gives a few shillings to old age pensioners, when rising prices immediately begin to take the few shillings away from them’

Before attacking links with America

‘There is only one hope for mankind, and that hope still remains in this little island. It is from here that we tell the world where to go and how to go there, but we must not follow behind the anarchy of American competitive capitalism which is unable to restrain itself at all’

He concluded with a call to save the NHS:

‘It only had to last a few more years to become a part of our traditions, and then the traditionalists would have claimed the credit for all of it. Why should we throw it away? In the Chancellor’s Speech there was not one word of commendation for the Health Service—not one word. What is responsible for that?’

And to save the Labour Party

‘Do not let us change direction now. Let us make it clear, quite clear, to the rest of the world that we stand where we stood, that we are not going to allow ourselves to be diverted from our path by the exigencies of the immediate situation. 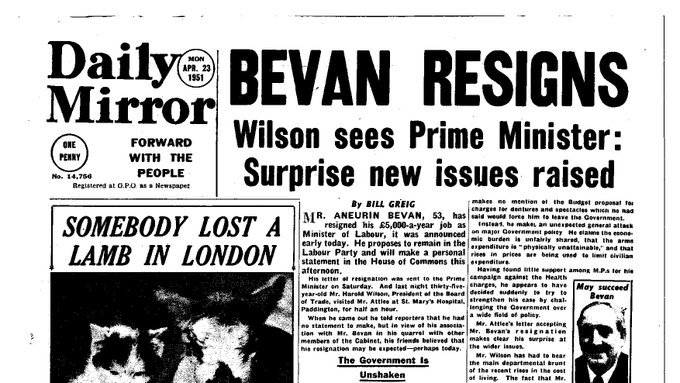 Listening was Tony Benn, who believed that Bevan had totally misjudged the mood of the party:

‘His rising was greeted with a few ‘hear hears’. Not many. The government front bench looked sicker and sicker as the speech went on….

‘The fact is that though there was substance in what he said, Nye overplayed his hand. His jokes were in bad taste. I felt slightly sick.’

Benn concluded that the speech:

‘has to be said that he has written the Tory Party’s best phamplet yet…Nye’s attack was bitter and personal. His style was that of a ranting demagogue’.

Dalton believed that it was ‘a most vicious speech, most quotable by the Tories’

Gaitskell noted in his diary 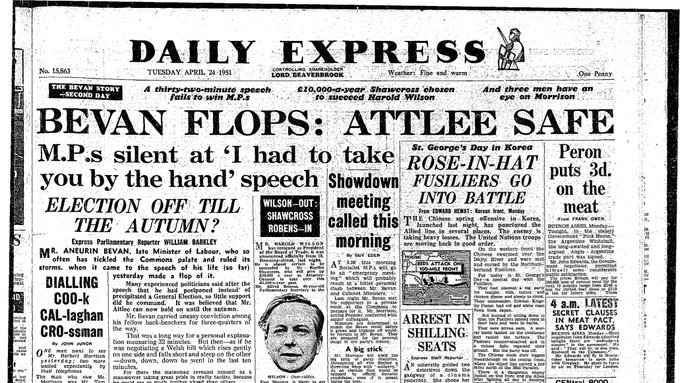 ‘Bevan who so often has tickled the Commons palate and ruled its storms when it came to the speech of his life (so far) yesterday made a flop of it.

In the aftermath, Bevan made another misjudged appearance in front of the PLP to justify his actions.

‘He almost screamed at the platform. At one point he said ‘won’t have it, I won’t have it’. And this of course was greeted with derision.You won’t have it? called other members of the party’

Benn admitted to being shocked by Bevan’s mindset: 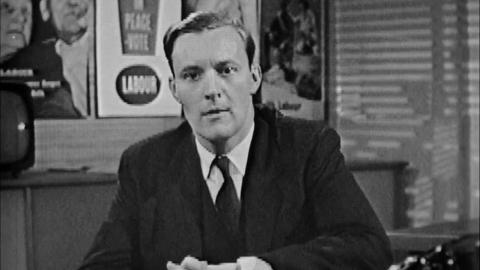 Benn concluded that Bevan had lost it

‘The megalomania and neurosis and hatred and jealousy and instability he displayed astounded us all’.

After the meeting finished, the whole party attended the memorial service for Ernie Bevin.

Benn’s diary encapsulates the end of one era and the start of a new one:

‘The twin qualities of intellectual ability and political forcefulness make up Hugh Gaitskell’s greatness. It is rather ironical that Nye should have been largely responsible for making Gaitskell into the major political figure that he now is’.

The Daily Mirror however, pondered Bevan’s next move:

‘Bevan is at 53 still a young man by political standards. In that way he still has time on his side. What is he going to do with it?’

It would prove to be the end of Bevan’s Cabinet career as Labour began a period in opposition that lasted thirteen years.