Britain rejoices after ‘the people have fought and endured five years, eight months and four days of the bloodiest war in history’

How ‘the people’ and Mr Churchill, Attlee and Bevin celebrated their VE Day

Crowds – of about 10,000 – began to assemble in Trafalgar Square on the evening of the 7th May.

Formal celebrations were put on hold after Churchill agreed to wait until 3pm on the 8th at the request of Truman and Stalin.

A national holiday was declared in Britain for 8 May 1945.

In the morning, Churchill had gained assurances from the Ministry of Food that there were enough beer supplies.

He was told that beer would not run out.

The Board of Trade announced that the public could purchase red, white and blue bunting without using their coupons.

At 3pm Churchill made a national radio broadcast from the Cabinet Room at Number ten where he and his colleagues had ‘grappled with so many grim problems during the years of war’.

Through loudspeakers on Whitehall, the people heard the broadcast:

‘Almost the whole world was combined against the evil-doers, who are now prostrate before us. Our gratitude to our splendid Allies goes forth from all our hearts in this Island and throughout the British Empire’

‘The injury she has inflicted on Great Britain, the United States, and other countries, and her detestable cruelties, call for justice and retribution.

We must now devote all our strength and resources to the completion of our task, both at home and abroad’

‘Advance, Britannia! Long live the cause of freedom! God save the King!’ 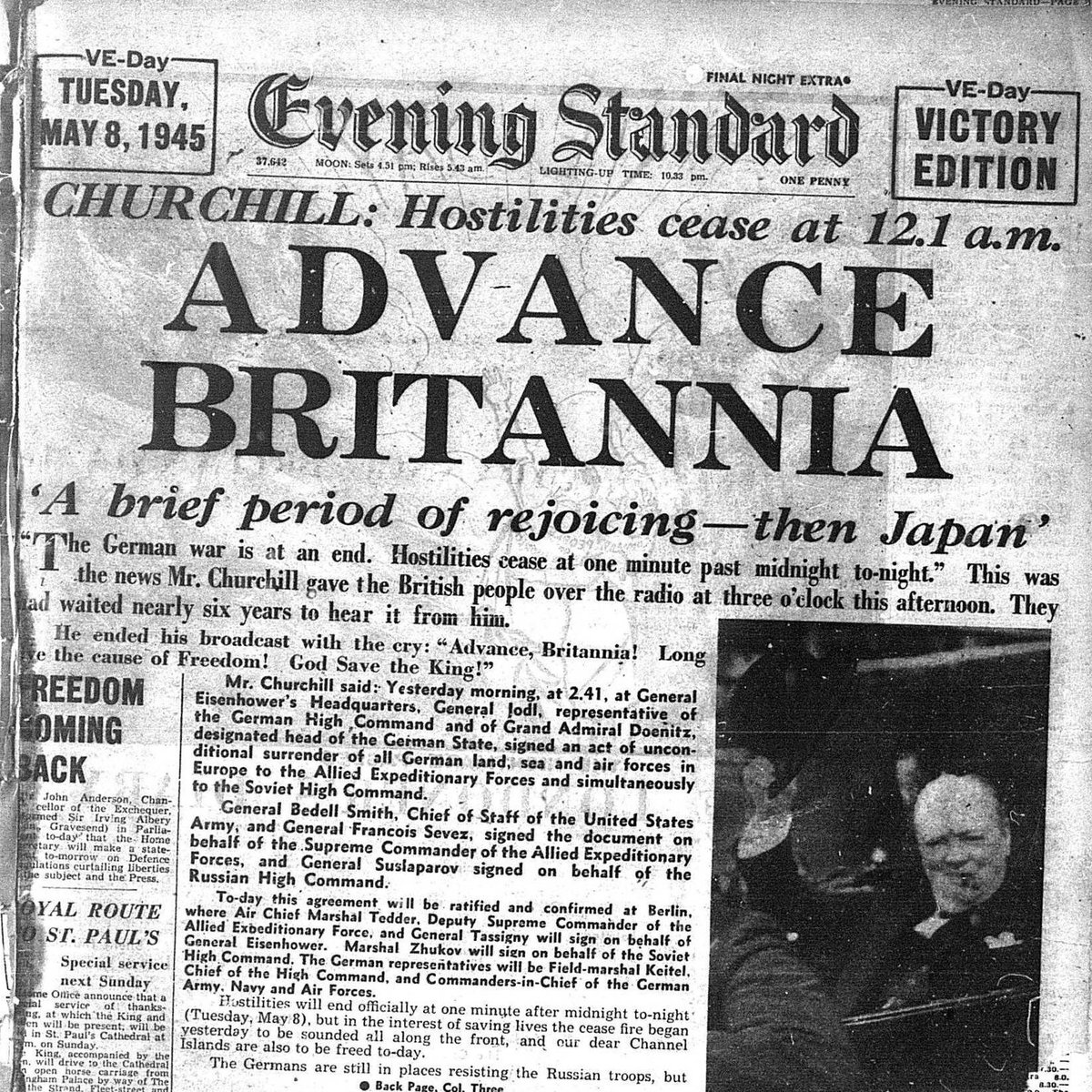 Ernie Bevin, Minister of Labour, addressed a meeting at the Savoy Hotel to ‘celebrate the opening of an exhibition of historical and British wallpapers’.

Bevin claimed that the next government ‘would have a task to perform that would call for the sympathy, prayers and help of all’

He warned that the rebuilding of Europe ‘would be a tremendous task’ and that it would ‘tax all our courage, philosophy and resolution’.

Churchill addressed the Commons before going across to St Margaret’s Church. There, the speaker read out the names of the 21 MPs who had died during the war.

At 4:30pm, Churchill and the War Cabinet went over to Buckingham Palace. He stood on the balcony with the two princesses

At 6pm Churchill and Bevin appeared on the balcony of the Ministry of Health building.

Churchill told the cheering crowds: ‘This is your victory.’

‘It is the victory of the cause of freedom in every land. In all our long history we have never seen a greater day than this. Everyone, man and woman has done their best’.

Churchill tried to bring Bevin forward for his own cheer – but Bevin is said to have replied ‘No Winston, this is your day’

For two other members of the War Cabinet – Anthony Eden and Clement Attlee – celebrations were more muted.

The pair were attending a conference in San Francisco – on building a new United Nations organisation.

Attlee and Eden celebrated together on the top of a skyscraper, but Attlee later admitted that ‘we were very sorry not to be at home for the celebrations’

‘Now we have emerged from one deadly struggle – a terrible foe has been cast on the ground and awaits our judgement and our mercy’.