Having been ahead by 20% in the polls, he was expected to lead the party to victory at the 1997 election.

A look back at his leadership and how he put Labour on course for power. 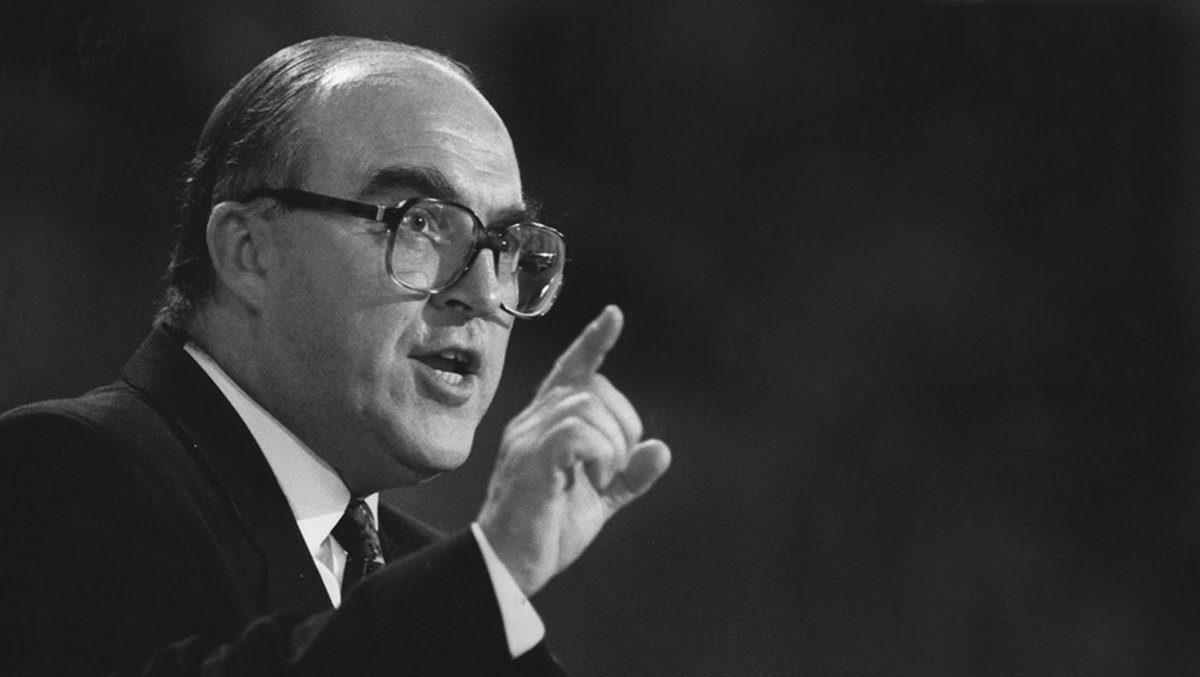 Smith became Labour leader in the aftermath of the party’s fourth consecutive defeat. He enjoyed support on both wings of the party.

In accepting the leadership, he told conference: 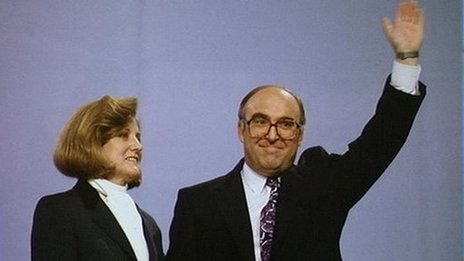 ‘I joined the Labour party, because of its values the values of democratic socialism. I admired its rejection of injustice and the deep commitment to provide….

….by the action of the community, real opportunity for every citizen in the land, regardless of their background, income, race, colour, gender or creed.

He pitched to be the party of change and renewal:

‘the party of change must be ready to change itself, to be the best and most effective vehicle for realising our values. In each age and every generation, as we advance and grow, as we attempt to achieve more and always to reach higher’

‘I look around and in every part of our country, in every walk of life, in our schools, at work, in our streets and towns, I see opportunity denied, potential unfulfilled and talent unused’

But Smith also set himself on a collision course with the trade unions over their influence in selecting parliamentary candidates:

‘We must base our internal democracy on the principle of one member, one vote’

In the search to find a winning election strategy, a buzzword became  ‘Christian Socialism’ Smith claimed his ‘Christian outlook…gives meaning to my political actions, because you have this sense of obligation to others.’ 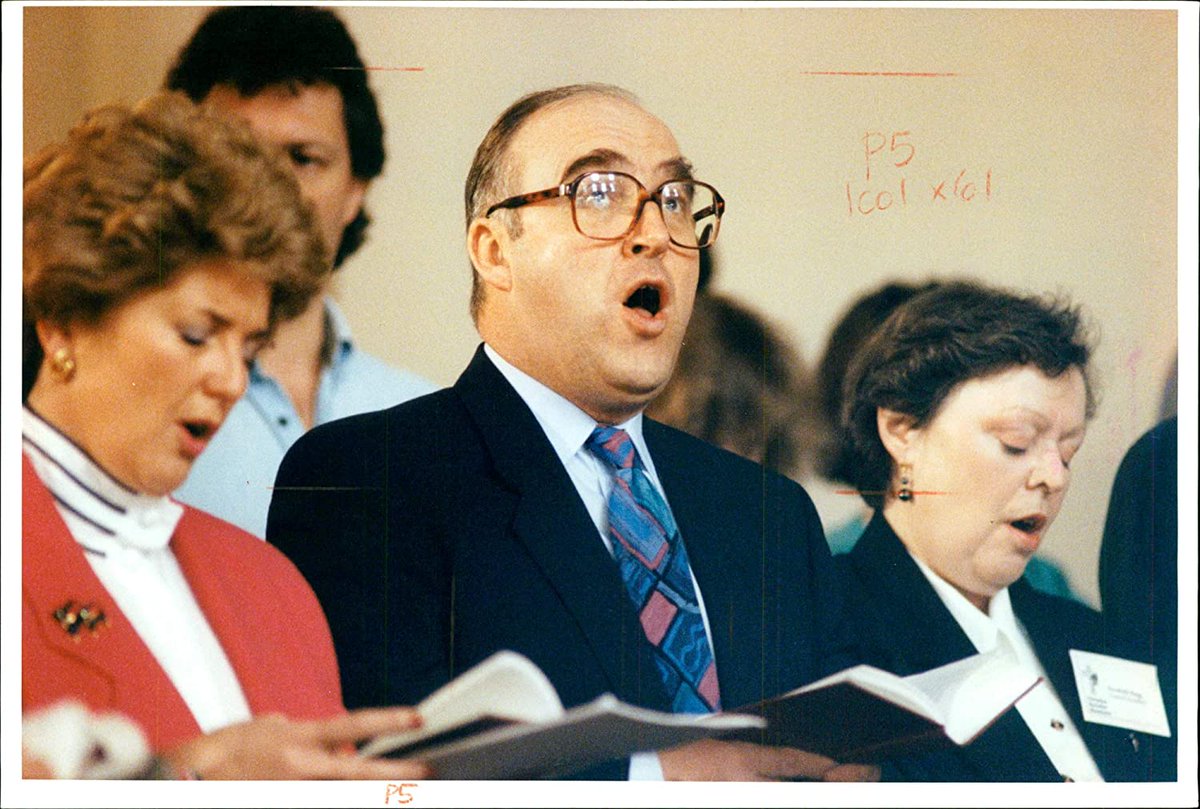 ‘I believe people want to be citizens of a country which shows care and responsibility for all its people, and which does not pass by on the other side.’

Labour moderates were cheered by the Democrat victory in the US – their first since 1978. 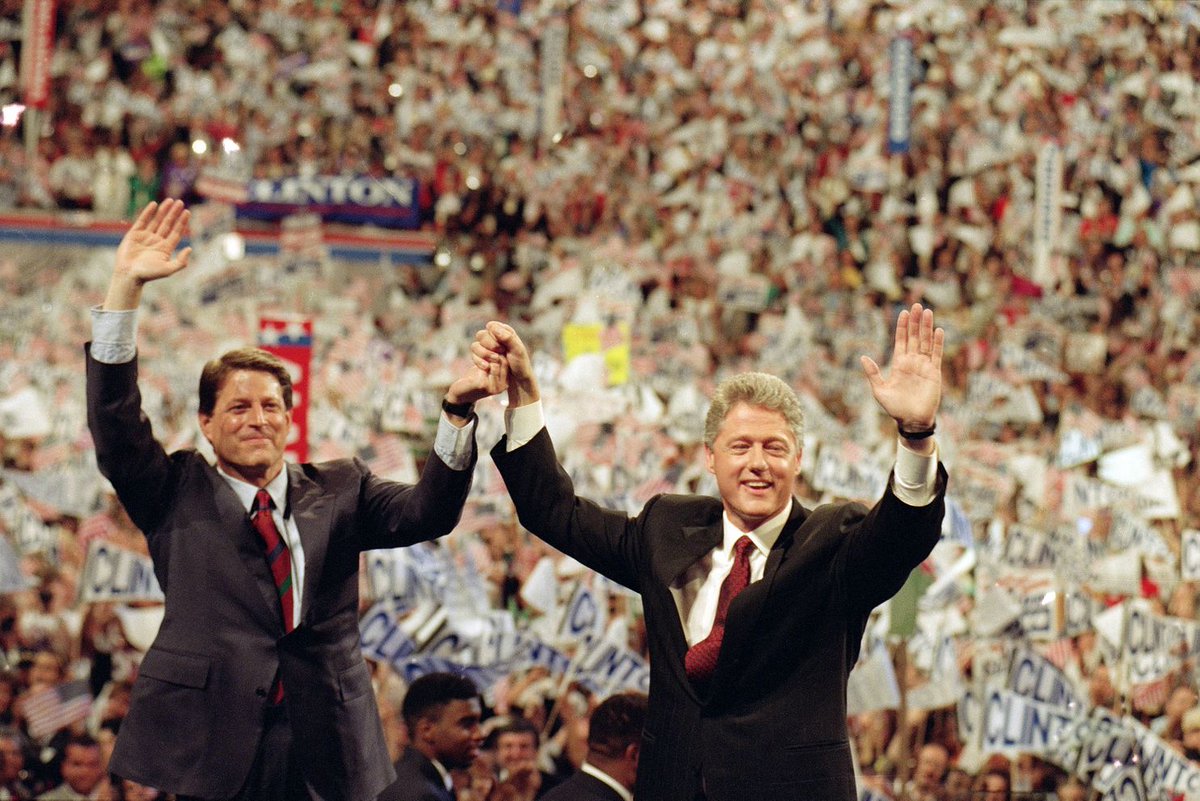 Phillip Gould, who had worked on the campaign, outlined his conclusions in the Guardian:

‘First, hope can defeat fear. And, now that it has happened once, it makes it much more likely to happen again. But the building of trust is still difficult and can only be done over a long period of time – in this, John Smith is Labour’s greatest weapon’

Second, winning the economic argument is central to winning elections. Third, Labour must find a way of reaching our Basildon equivalent of the “working middle class”. Labour needs a message, a language and a populist touch that bring these voters back to where they properly belong – the Labour Party.

Finally, Labour must develop campaigning structures and strategy able to cope, not just with the negative campaigning of our opponents, but also the hostility of much of the press. I do not believe this to be a secondary issue, but a central one.

The Conservatives were hit by a number of scandals, economic problems and division over Europe.

Smith maximised public anger at cuts to the coal industry. He called on the ‘heartless government’ to visit mining communities and ‘speak to the miners whose skills are unique and irreplaceable’.

Smith’s first conference speech as leader urged Britain to ‘take a confident and leading role in the European Community’. He called for Britain to ‘strengthen its democracy’ and give ‘more power to the European Parliament’.

Yet there were euro critics within Labour. Austin Mitchell accused Smith of being ‘silent’: The truth is that Labour has no alternative economic policy’

By the end of 1992 there was already criticism, what Clare Short coined, of ‘masterful inactivity’ 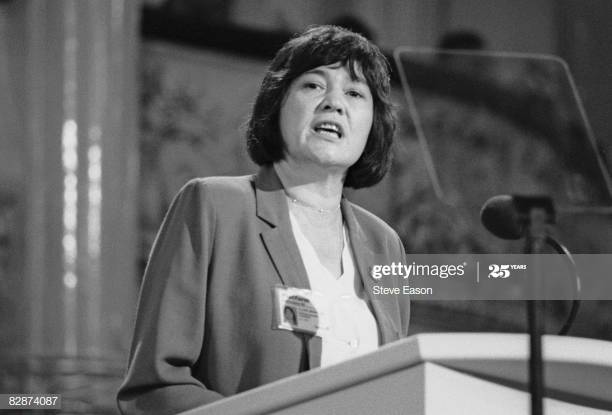 The Guardian reported that ‘beneath the cheery facade at meetings of the parliamentary party many feel that John Smith’s new team should be scoring more political runs’.

Much attention focussed on ‘the modernisers’ and the drive to move the party to the centre-ground.

‘these so called modernisers are really Victorian Liberals, who believe in market forces, don’t like trade unions and are anti-socialist. The party needs to be rebuilt under local control like it was in 1918. 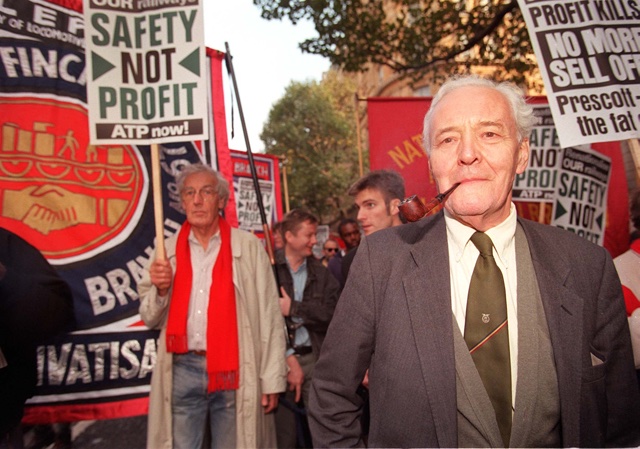 Writing in Tribune, Seamus Milne urged a ‘Death to the Modernisers’ calling on them to be purged to win the working class:

‘Labour’s modernisers are gripped with yesterday’s agenda, tried and failed wanting in 1987 and 1992 when Labour failed to win back its core working class vote’

Milne called on Smith to purge the modernisers and learn from Militant:

‘In Glasgow, Militant is currently taking council seats from Labour…If Labour is to win office in the 90s, these people (the modernisers) and their reactionary politics must be taken on and defeated’ 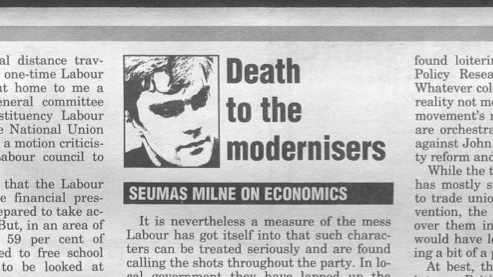 A leadership defining speech came in February 1993, at Bournemouth, where Smith set out his vision for  ‘new politics for a new age’ – of ‘dynamic markets and active government’ 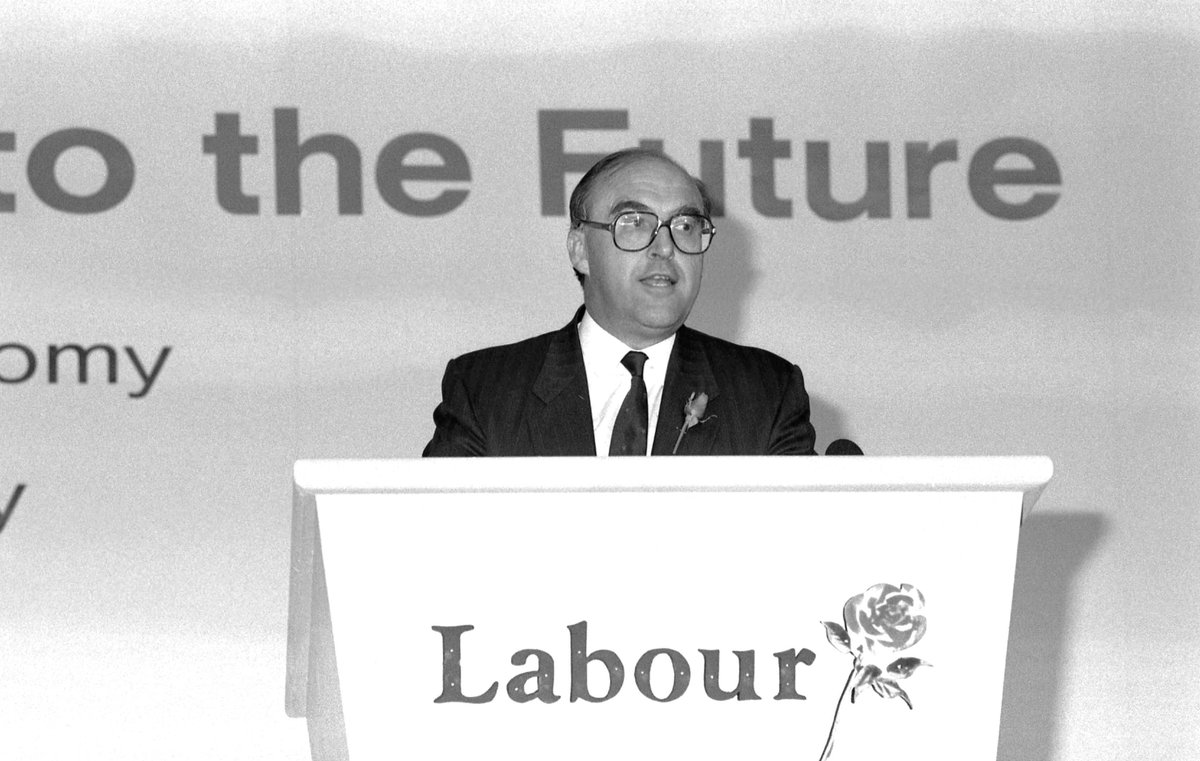 In an echo of Bill Clinton rhetoric, Smith called for ‘a government of the people, by the people, for the people’

Writing in the Daily Mirror, Alastair Campbell dubbed the speech ‘a new dawn’ for Labour. 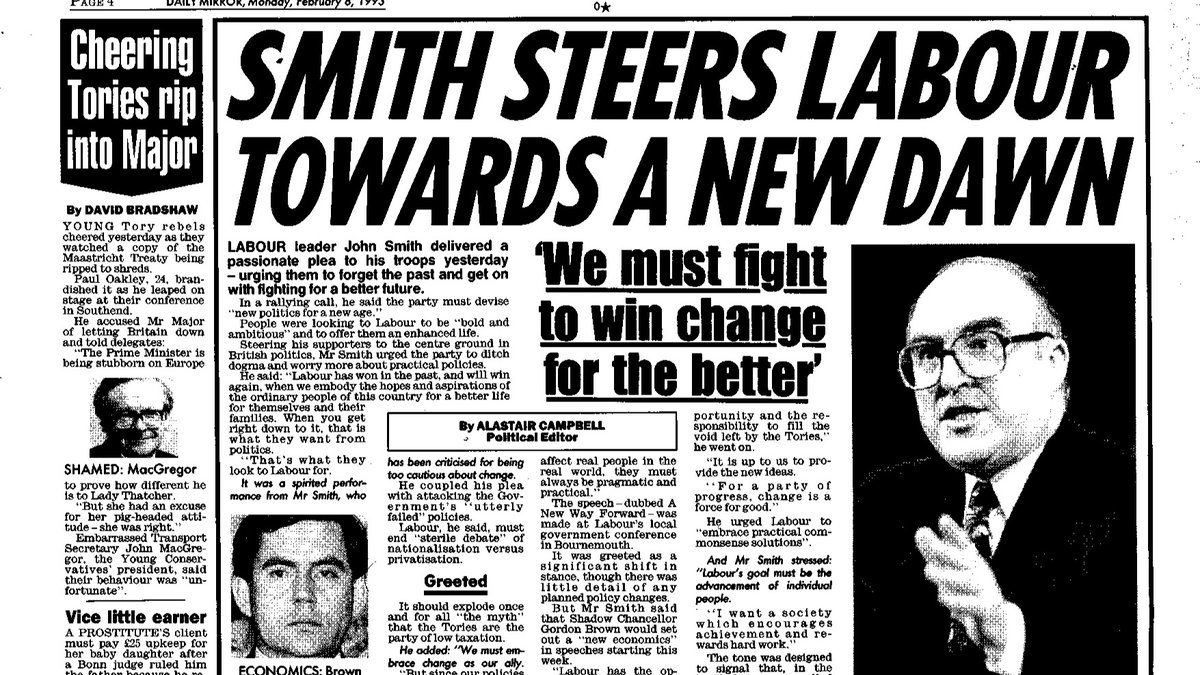 The speech was interpreted as an end to debates about nationalisation in the party.

‘For years we have conducted a largely sterile debate about the ownership of industry and services as if privatisation and nationalisation were the only conceivable choices in economic policy.

In the Labour party, we see clearly the merits of the mixed economy. Ownership today is therefore largely irrelevant’ 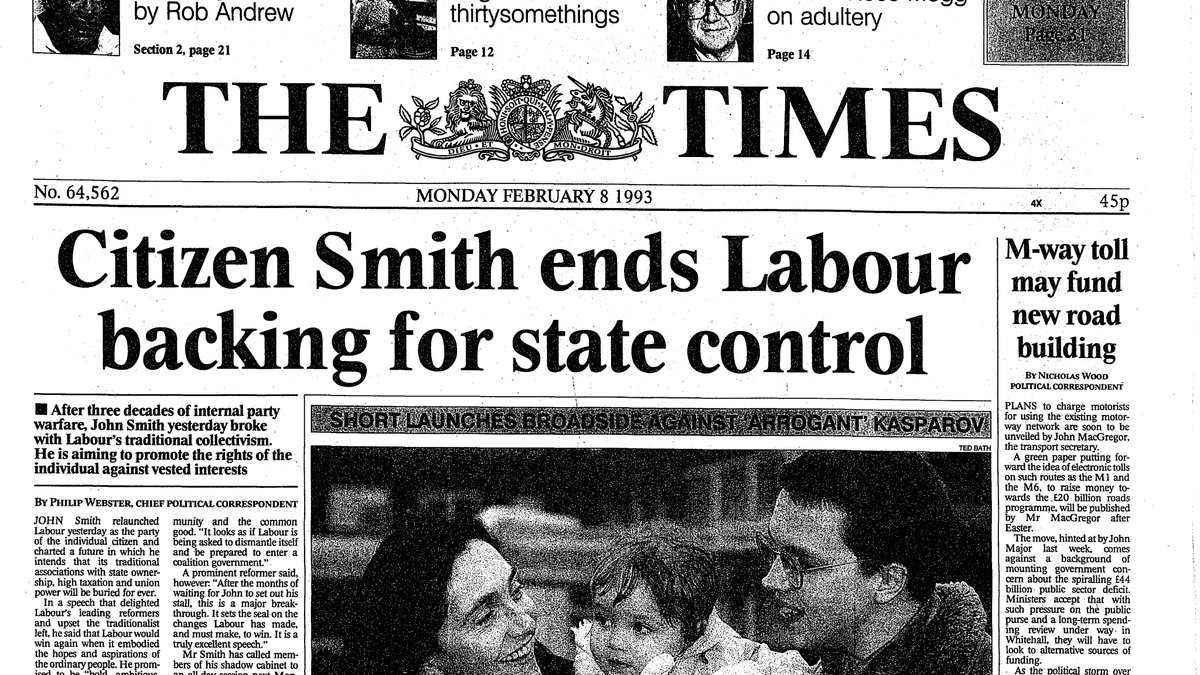 However, critics such as Tony Benn, argued that Smith’s speech was a ‘repudiation of socialism’ in that ‘it appears to embrace individualism’.

‘It looks as if Labour is being asked to dismantle itself and be prepared to enter a coalition government.’

Dennis Skinner was angered by Smith’s speech: ‘It is high time we had a socialist manifesto. The right-wing have produced four manifestos and lost all four elections’.

‘Because the intervention of government comes in new and different ways and not in the traditional forms with which Tony Benn is more familiar does not mean it is not powerful and active and necessary.’

It was not just the Bennites who were unhappy. Bryan Gould warned Smith that he needed to be bolder:

‘There are many in the party who are impatient to address this radical agenda and anxious that excessive caution may inhibit the party from doing so. We want to help the party leadership by providing a focal point for the new thinking’

‘John Smith did the easy bit – telling the party and the wider electorate what the Labour Party is not. Virtually no one in the Labour Party over the last decade has seriously argued for wholesale nationalisation or questioned the need for a mixed economy’

His biographer Andy McSmith concluded in the New Statesman:

‘a year into Joh Smith’s leadership, the Labour Party has real problems. But, whatever his critics say, he is not one of them…the party seems not to know what it believes in’.

Anthony King added a note of caution too:

‘Labour under John Smith in 1993 is faring no better – if anything, slightly worse – than Labour under Neil Kinnock in 1990’

To the economist, Smith did not offer a solid alternative 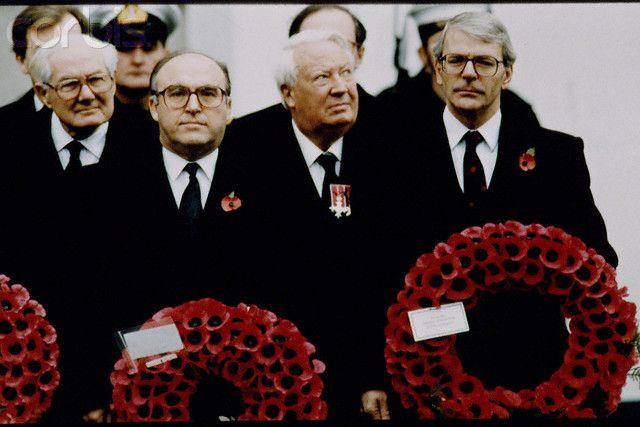 ‘Prime Minister John Major is in trouble. Labour Leader John Smith will be soon. Doesn’t anyone have the right stuff? Wanted: leadership for Britain’.

Despite the poll lead, they concluded:

‘Activists complain that the party stands for nothing. Modernizers worry about its lack of appeal to middle- of-the-road voters’.

And critics such as Robert Kilroy bemoaned Smith’s weak leadership

‘He displays no leadership qualities. He has no policies. He lacks ideas and conviction. He is as gutless as the Prime Minister. 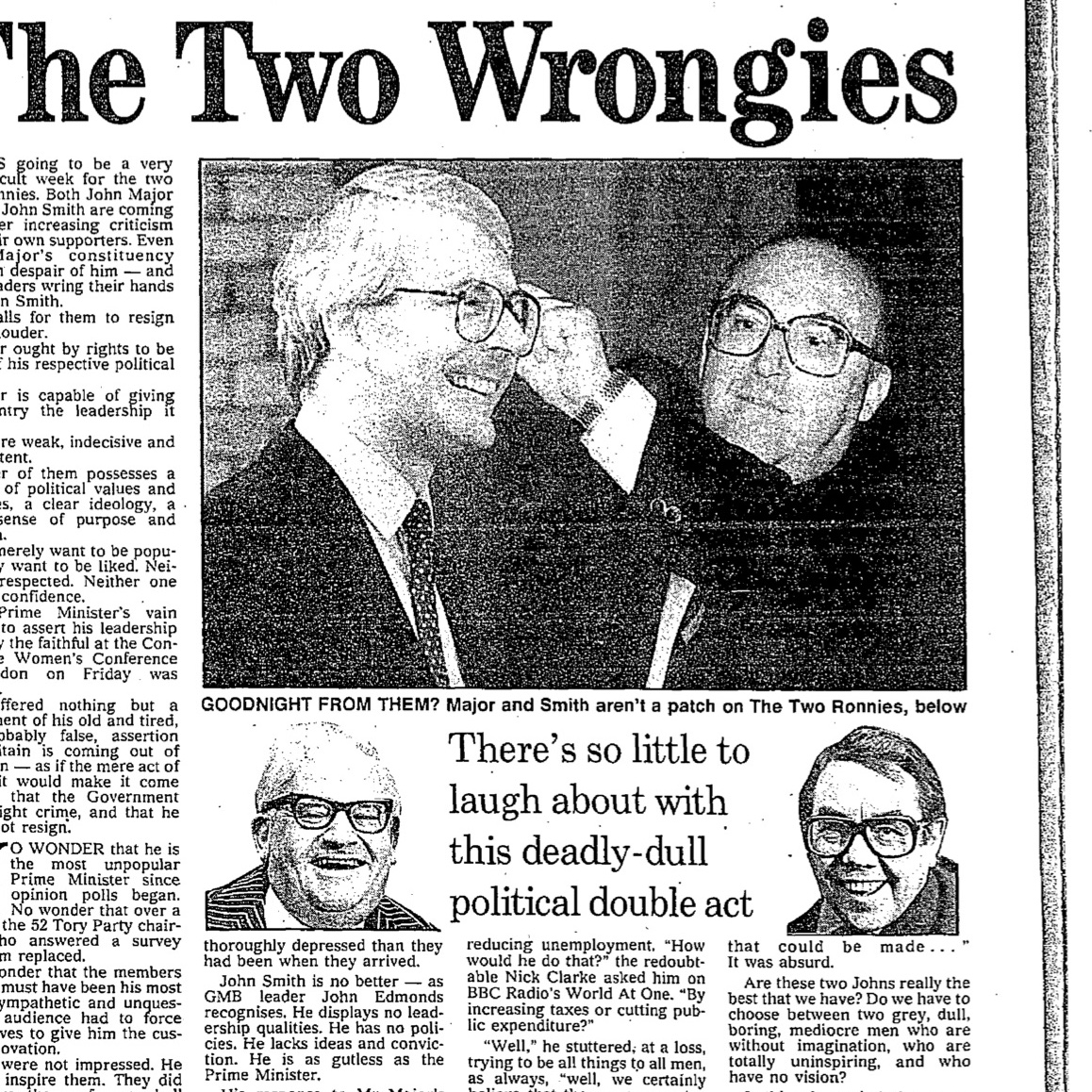 Barbara Castle called for ‘a bit more confidence in its principles. We cannot win on anybody else’s’

But in May 1993, the Tories lost control of 15 out of 16 shires – including Dorset and Kent – in what Labour dubbed ‘the rout of the century’. Margaret Beckett argued that ‘It is the end of the Tory shires’.

In the same month, Labour appointed the 33 year old Sally Morgan to run the party’s campaign in marginal seats:

‘We have to convince the electorate of our competence to run the economy and we have to persuade people that Labour is on their side and supports their aspirations.’

Smith’s defining moment as leader would come in taking on the trade union block vote over the selection of parliamentary candidates.

Smith claimed: ‘As long as trade unionists represent the interests of the working people of Britain there will always be strong links between the Labour party and the trade unions’

John Edmonds – leader of the GMB – emerged as the biggest critic of the Smith ‘betrayal’:

‘Sometime soon the so-called “modernisers” will have to admit that they got it wrong. They have done more damage than they know. The choice facing Labour is not between democracy and dinosaurs’ 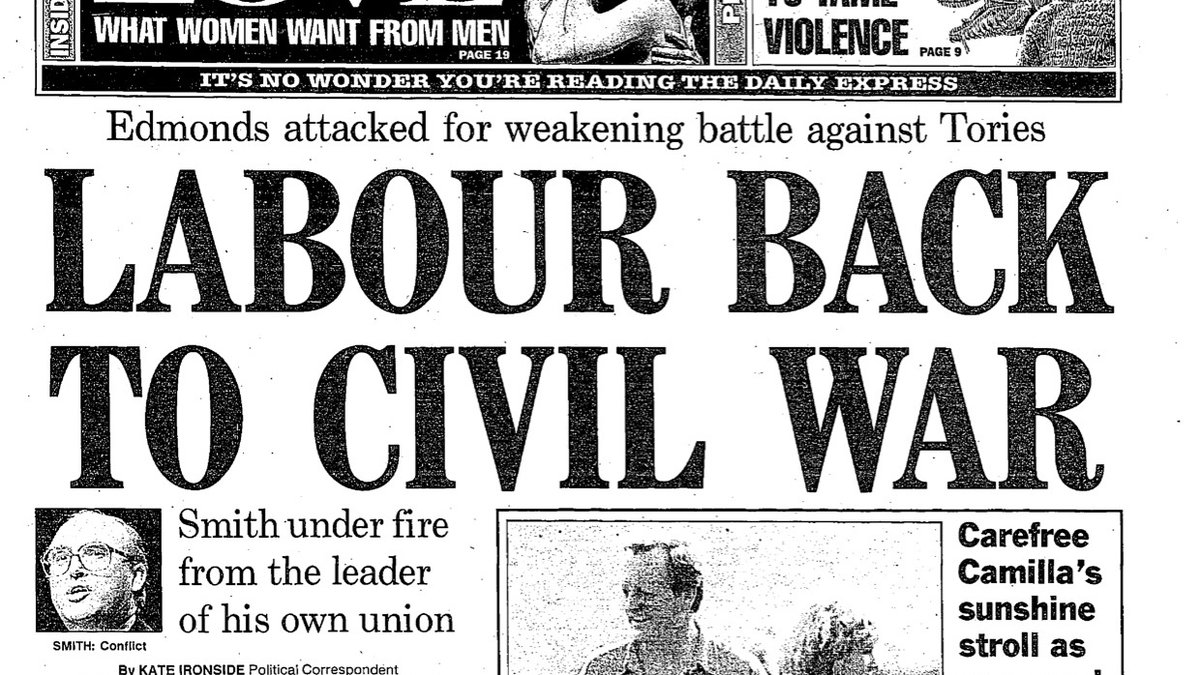 Edmonds was more broadly critical of Labour: ‘The time for bland timidity is past…We should never allow the limits of Labour’s ambitions to be set by an economic framework laid down by the Tories.’

There was a rebellion in Shadow Cabinet too. John Prescott, and Michael Meacher signed an advertisement in Tribune which criticised OMOV.

Leading the fight for the reform was Tony Blair. He urged unions to recognise the opportunity to both reform and put Labour on the path to power:

‘Unblocking Labour One man, one vote is not a betrayal of the unions. Implemented boldly, it will take them and Labour side by side into the modern age’

Blair argued: ‘Those who resist change do so by making quite wrong accusations about the case for change and then attacking the accusation rather than answering the actual case. 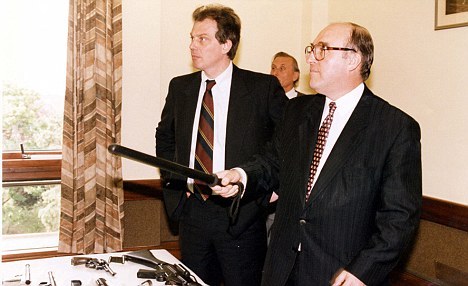 He called on Labour to be the party of change:

‘Change should not make our party frightened. This party came into existence to fight for change. But to change our country, we must show that we have the courage to change ourselves’

But a summer of ‘civil war’ dominated the headlines. Smith went on the attack, telling the TUC conference of goals of a minimum wage, full employment and skills training if Labour were elected.

When he opened the vital debate on constitutional reform at Labour conference he claimed it was:

‘Vital – absolutely central to our strategy for winning power, and I ask you to unite behind them. What millions of trade union members and Labour supporters want above all else is a Labour government’.

‘Don’t make any mistake: this debate is being watched throughout the country. The press are waiting to see what is going to happen’

“There is no doubt that this man, our leader, put his head on the block by saying basically ‘I fervently believe in a relationship between the trade and unions and the Labour Party, and a strong one’. 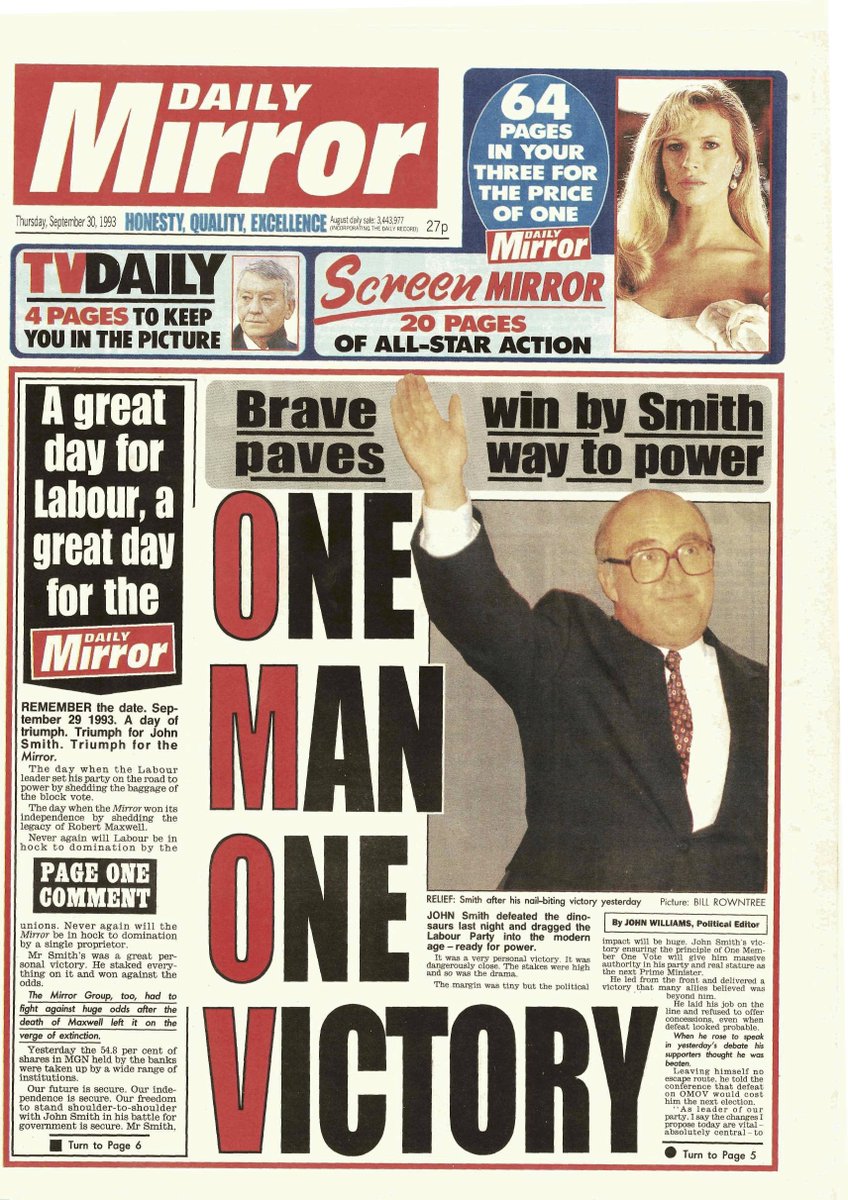 Smith won the key rule change introducing one member one vote for parliamentary selection by 47.509 per cent to 44.388 per cent

By Feb 1994, polling showed that the OMOV had shifted voter attitudes. The proportion believing a Labour Government would be “under the thumb of the trade unions” fell to 42 % from 65 %.

Smith ensured the party would adopt all women shortlists, despite opinion poll showing that only 28% of the public thought that it was a good idea. 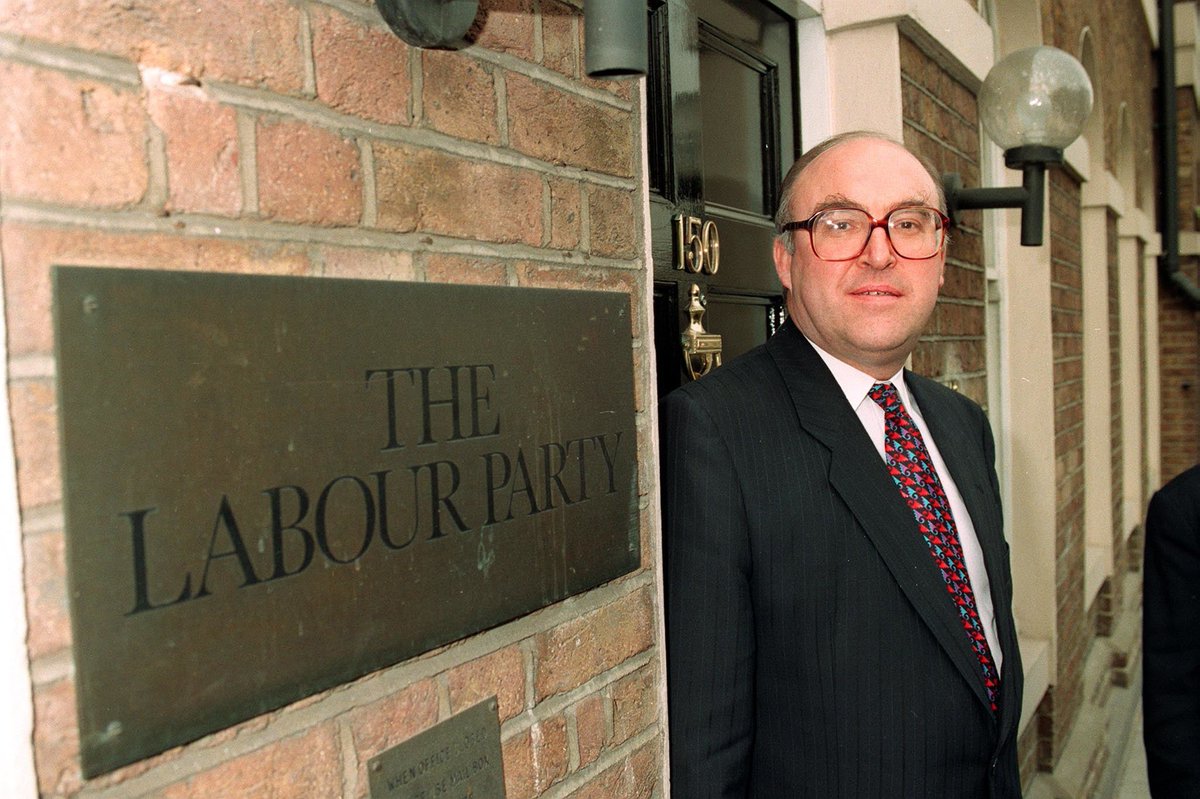 In one of Smith’s final interviews with the Daily Mirror he urged the party to maintain its focus:

‘Our message is getting across, but we have to keep working at it. It’s a constant mission, we can’t be complacent’.

He dismissed the idea that he was cautious:

‘I want policies to be properly made because I want them to stick. I’m not in to stunt politics. I’m in serious politics. Serious politics means you prepare your policies thoroughly because you mean to carry them through’

He defined Labour values as a ‘powerful idea’:

‘That the doors of opportunity must always be open to everyone in society. Every family must get a break’

The last line of his speech that night was ‘Please give us the opportunity to serve our country. That is all we ask.’

It would be his final act as leader.